Ep. 025- Torange Yeghiazarian: How Narrowing Your Niche Enables Your Business To Thrive 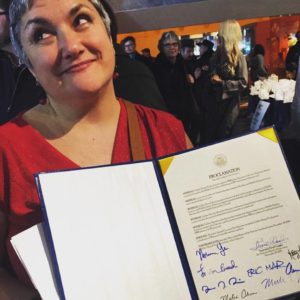 Torange Yeghiazarian is the founding artistic director of Golden Thread Theater Company, the first American theater company devoted entirely to plays from or about the Middle East. Based in San Francisco, they are celebrating their 20th anniversary. Torange’s artistic life began with her career in acting, but she quickly realized she wasn’t going to be able to work on the kind of stories she was passionate about sharing. Armenian and from Iran herself, she wanted to reach other women and men in the Middle Eastern community and create a space for their stories to be heard. So she started her own theater company, and never looked back.

What’s so extraordinary about Torange’s story is how she chose a narrow niche to focus on, and when time got tough in her business she simply paired down and focused on that niche even more, which resulted in a huge pay off for her mission and is a testament to the power of staying true to your vision as an artist and taking your business seriously in the process of seeing it through.